We study how new species form. But what does that mean, exactly?

The factors that lead one species to split in to two are central to evolutionary biology- they are, after all, at the heart of the "origin of species." In biology, a species is defined as a group of individuals that "actually or potentially" interbreed in nature; that is, all individuals within a species can mate with each other and produce viable offspring.  Humans are a unique species because any two humans, from anywhere in the world, can produce offspring. Humans and chimps are different species because no human can produce offspring with a chimp; this is termed "reproductive isolation," and is the key to identifying different species.

The process of species formation, or "speciation", can take a long time. Humans and chimps have been reproductively isolated groups for an estimated 6-8 million years, when they last shared a common ancestor. Indeed, most species are old, many millions of years old. Over this time, different species will accumulate mutations that make them genetically incompatible, so that after several millions of years, they couldn't produce viable offspring even if they wanted to. This makes is difficult to study how new species form, because we can't go back in time to observe which processes- like geographical separation, divergent selection, and genetic drift- are responsible for causing the original split between old species.

Difficult, but not impossible. Speciation is an ongoing process that can itself take a long time, so by studying recently diverged species, or different populations of the same species, we can identify the factors causing those species or populations to become different from each other. This is where barn swallows come in to the picture. 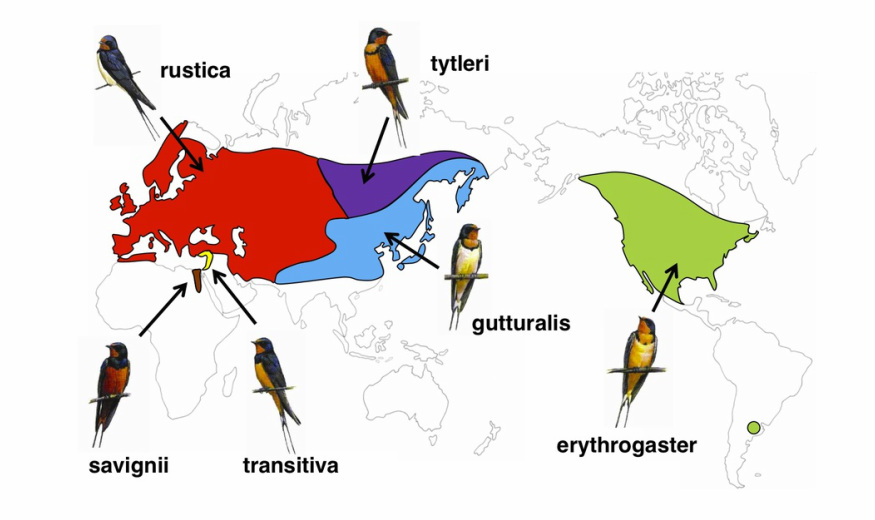 There are many different kinds of reproductive barriers, but we are particularly interested in "premating" barriers- things that prevent individuals from mating with each other. In many species, premating barriers are a result of differences in sexually selected traits between different populations. Sexually selected traits are the bright colors, elaborate feathers, morphology and songs that are common throughout the animal kingdom, and they are used, typically by males, to attract mates. Females from different populations often prefer different traits- for example, female barn swallows from Europe like males with long tail streamers, whereas females in North America like males with dark colors. Thus, if a North American female encountered a European male, with long tail streamers but light coloration, she might refuse to mate with him. This failure to mate and produce offspring results in a reproductive barrier between differently colored groups, and can be the first step in the speciation process. If this barrier persists over time, the two isolated groups will eventually accumulate enough different mutations that they will be unable to produce offspring together, and they will be different species.

Of course, European and North American barn swallows will never come into contact with each other since they live on different continents, but all the Eurasian subspecies DO contact each other. Therefore, one of the big goals of our project is figuring out why barn swallows look different in different parts of their range, and if these differences in color, morphology, and song are what keep them from mating with each other in the contact areas between subspecies. If so, it would suggest that differences in sexual selection are an important force in driving population divergence.

Determining which traits or differences are important in forming (or breaking down) reproductive barriers is not always easy. For us, it means that we have to go out to the field and measure lots and lots of birds all over their range. We can then bring blood samples back to the lab and use genetic and genomic analyses to determine how much gene flow occurs between different groups. Measuring gene flow is a great way to measure reproductive isolation, since it's very difficult to observe mating behavior in nature. But if individuals from two different subspecies mate and produce offspring, those offspring will have genes from both subspecies, and we can detect this by collecting blood and scanning their genomes. We can also use genomic analyses to infer how divergence is happening- for example, divergence by sexual selection leaves a different genomic signature than divergence simply by distance and random accumulation of genetic mutations. So that's what we're up to for the next several years: catching birds from all over the world, measuring their color, morphology and song, and then analyzing their genomes to find out what's driving them to be different from each other. We'll post more details about all these steps as we go, so follow along in the News and Updates section!